Thank you so much, everyone, for making
BLOOD REDEMPTION
the #1 Amazon Best Seller in Dark Fantasy and Dark Fantasy Horror!
And for doing it on Halloween!

This was one wild release, and I cannot thank you enough for your continued enthusiasm, support, and kindness! May your lives be filled with joy...
And may your dreams become your destiny! 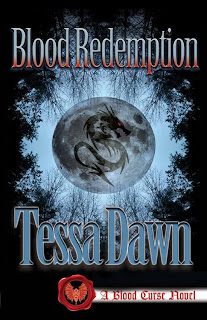 Some souls are forged in fire.
Some hearts are packed in ice.
Some elements were never meant to be combined…
BLOOD REDEMPTION ~ a journey of elemental darkness and primordial light.

Saber Alexiares is no ordinary vampire. He is like a cruel, fire-breathing dragon. Reared in the bowels of the colony by Dark Ones, he has no conscience, no compassion, and no saving grace. Captured by the enemy, he is sentenced to execution by sunlight only to discover that his body will not burn — he isn’t who he thought he was. He was stolen at birth. He was reared by the wrong house. And the sunlight isn’t going to kill him because he does have a soul.
Vanya Demir is the very heart of goodness and light, an ancient female from a magical race, the progeny of humans and celestial deities before they were cursed by the Blood. With her deep-rooted sense of duty; naïve upbringing; and tragic, personal history, she has unknowingly packed her heart in ice and dedicated her life to the service of the Vampyr. She is wholly unprepared to face a fire-breathing dragon.
When their paths converge beneath a Serpens Blood Moon, they will each have thirty days to reconcile the irreconcilable, to confront the primordial darkness that threatens to destroy them both. Can a being lost in darkness for eight-hundred years ever find its way to the light? Can a heart that’s been buried for as long as it can remember risk the ultimate in betrayal and damnation simply for the hope of BLOOD REDEMPTION?
Amazon.Com
Barnes&Noble.Com

What's coming up next in the Blood Curse Series?
Blood Father ~ Kagen's story
(release date to be announced)

How to stay involved until then?
(click on the link below)
http://blog.tessadawn.com/2013/10/where-and-how-to-get-involved-with.html